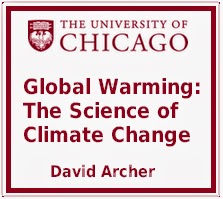 “This class describes the science of global warming and the forecast for humans’ impact on Earth’s climate. It brings together insights and perspectives from physics, chemistry, biology, earth and atmospheric sciences, and even some economics. The simple mathematics underlying these differing approaches is the only background one needs. It is an accessible, multidisciplinary tour of climate science for a general audience.”


This class is an updated version of Open Climate 101, which ran a few years ago. Open Climate 101 was a massive open online class (MOOC) and was disseminated from a computer at the University of Chicago. The new class is called Global Warming: The Science of Climate Change. It has been entirely redone and uses the Coursera platform which offers a suite of on-line interactive models.

The easy to watch videos are short duration and last between 2-10 minutes each. All-new on-line computer models, including extensive new browsing systems for global climate records and model results from the new AR5 climate model archive, and an ice sheet model.

The class is based on the textbook Global Warming: Understanding the Forecast. This is a highly accessible science based class does not require any special background. The course has three units.

The first unit begins with the basic principles for understanding the Earth’s climate. It reviews a simple model for the temperature of a planet, and build a picture of the complexity of the real climate system on Earth, with the greenhouse effect and climate feedbacks.

The second unit describes the carbon cycle of the Earth, how it stabilizes Earth’s climate on some time scales but destabilizes it on others. Fossil fuel carbon is part of the cycle, and a discussion of the impact of fossil fuel energy on the Earth’s carbon cycle.

The third and last unit of the class is about the human impact on Earth’s climate: why we believe it’s changing, why we believe we’re changing it, the impacts that could have, and the options we have to mitigate the situation.

Students can also explore topics of personal interest and investigate topics of their own devising, which they will write up and submit to grading by other students.

All required reading will be provided within the course. Discussion forums will be focused on two optional books, Six Degrees, by Mark Lynas and Hot, Flat, and Crowded: Why We Need a Green Revolution–and How It Can Renew America, by Thomas L. Friedman.