COP 19 Summary: The Good the Bad and the Ugly 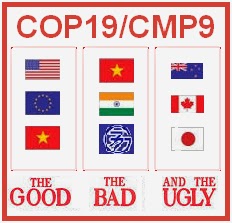 After a 24-hour extension of COP 19, the Warsaw climate summit concluded on Saturday evening with a deal to help vulnerable countries cope with the impacts of more frequent and intense extreme weather events and a compromise agreement setting out a roadmap towards a global treaty in 2015 in Paris. However, the language in the final agreement from COP 19 was weak, some countries have backpedaled and there are ongoing disagreements between rich and poor nations.

We have seen some progress on a number of fronts and Ministers said that there had been “essential progress” and they indicated that “key objectives” had been met. Here is a summary of the progress:

Despite these advancements, this year’s COP process did not live up to the urgency expressed by so many. Even new scientific warnings in the AR5 and Typhoon Haiyan’s terrible reminder of the impacts of climate change did not seem to move delegates to arrive at a more ambitious conclusion.

The language in the final conclusion from COP 19 was weak and the progress was less than needed. The more we delay difficult decisions the more unlikely it will be that we can meet the goals set for COP 21 in 2015. We clearly need to move faster to deal with the climate crisis. We have fallen short on the critical issues of finance, emissions reduction, or technology deployment.

The Warsaw Summit did succeed in getting the world’s largest economies to set out contributions (not commitments) by early 2015. The US and EU had wanted countries to make commitments rather than contributions.

The US, EU, and others argue that China, India, and the Middle East must also make commitments to reduce emissions. While the EU and US wanted all countries to make carbon reduction pledges by 2015, China and a group of developing countries succeeded in changing the language to “contributions” rather than “commitments.”

Countries like Japan, Australia, and Canada are this year’s climate villains as they have refused to assume responsibilities to either live up to their own emission reduction pledges or provide finance to help the developing world reduce its own emissions and manage climate impacts.

The developing world simply does not have the resources to address the threat of climate change, nor can they afford the emissions required to develop to the point where they can finance their own transition, (nor do we have the time for them to do so).

As the major source of current and historical GHGs, the developed world must live up to its responsibilities. While the developing world will be impacted more than wealthy countries, slow growth cannot be an excuse for inaction as the economies of the developed world will be decimated by unbridled climate change. The choice is between enduring some fiscal pain now or suffering from the devastating economic and social consequences later.

For the COP process to succeed we need to see:

The pledges made in Warsaw do not go far enough, but we are ever so slowly moving in the direction of better climate policies. The deal agreed to at the end of COP 19 keeps negotiations on track, but the language is weak. There is still hope for a globally binding deal in 2015 and it is up to all of us to do everything we can to keep that hope alive.

Our Place in the Natural World

Confessions of a former capitalist: The journey that made me an advocate of radical change

Almost ten years ago, journalist and author Naomi Klein asked me whether capitalism can be sustainable. I responded by citing a mountain...

How 3 Carbon Removal Technologies Work Together to Mitigate Emissions