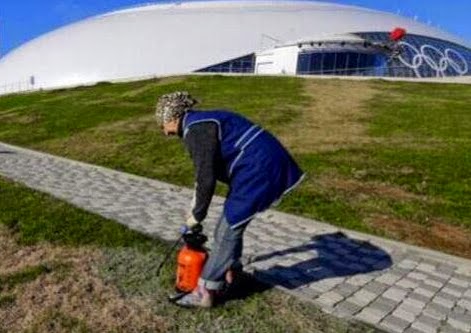 The XXII Olympic Winter Games offically open today in Sochi, Russia, however rather than being the greenest games ever, they will likely be remembered as being rife with greenwash.

In 2007, the Olympic Committee selected the Russian Federation to host the 2014 Olympics in Sochi, a resort on the Black Sea.

UNEP is a longstanding collaborator with the Olympic games and they were invited by the Russian Government and the Organizing Committee of the Sochi 2014 Olympic Games to provide guidance on the integration of environmental considerations in the preparation and staging of the Games.

UNEP has conducted six expert missions to Moscow and Sochi that resulted in the following:

UNEP has also assisted with the development of Action Plans for the Sochi 2014 Organizing Committee in the following key areas:

The Sochi 2014 Organizing Committee is also working with other United Nations (UN) departments including the UNDP (the UN Development Program) and UNESCO (The United Nations Educational Scientific and Cultural Organization).

To help reduce the carbon footprint in Sochi, Dow Chemical was chosen as the Official Carbon Partner of the XXII Olympic Winter Games. The company is mitigating the game’s carbon footprint using its energy-efficient technologies. Dow has contributed in areas such as building infrastructure, industry and agriculture.

For the Sochi games Russia has inaugurated a system of green construction standards for approximately 200 venues that involves the use of environmentally friendly building materials and renewable sources of energy, waste minimization, recycling, reduction of greenhouse gas emissions, as well as sustainable water and energy use. While the theoretical ideals behind carbon reduction efforts and green building initiatives are laudable, news about the actual practices emerging out of Sochi are far less positive.

Russia destroyed vast swaths of land to build the 2014 Olympics. One example involves an entirely unnecessary 17-kilometer road though the pristine forest of the Caucasus Reserve in the Sakhe River valley, a UNESCO World Heritage Site. Corruption scandals are rampant and citizens have been subject to illegal evictions.

Environmental Watch activists say authorities have violated the “Zero Waste” pledge. It is also contravenes preexisting Russian Law. According to the nation’s Water Code it is forbidden to dump the construction waste in the area surrounding the Olympic Village due to the fact that it can contaminate the major water source in the area. Nonetheless, these regulations have been violated many times. Senior IOC members have urged Russian government to investigate and ensure the sustainability of the Olympics construction sites.

The green charade being staged Russia is illustrated by the “winners” of Russia’s “Gateway to the Future” Sustainability Award. This “honor” ostensibly recognizes the best ecological, social and economic projects carried out by organizations involved in preparations for the 2014 Games.

State owned Russian Railways won the best complex project award for its combined road and railway from Adler to Alpika-Servis. The railroad and parallel road that lead from Sochi up to the surrounding mountains for alpine events cost $8.5 billion, but the environmental toll will be even higher. There does not appear to have been an environmental impact assessment, or if there was it was either woefully incompetent or it has not been adhered to.

To build the railroad, the Russian Railways destoyed 30 miles of mountainside, decimated thousands of acres of forest, and pave over the Mzymta River which will prove disastrous for the Black Sea salmon. This project will disrupt the migratory habits of several other animal species in the Aigba Mountain Range. The once pristine Mzymta river has been tainted by chemical pollutants and debris. Although millions of trout hatchlings were released into the river in several batches, however, official monitoring report in 2013 found none alive. The road has also caused the wells in local villages to run dry and it may also cut off water supplies from wetlands.

The “Ornithological Park” just outside of Sochi was once a heaven for 65 species of birds including vulnerable Dalmatian pelicans. Now the park is buried under two metres (6.5 feet) of crushed rock and is devoid of bird life

The railroad is using an illegal landfill just north of Sochi, which is located in the middle of a water protection zone where dumping industrial waste is banned, this contravenes Russia’s “Zero Waste” program. The Environmental Protection Agency in the area said it fined Russian Railways, $3,000 for the dumping, but it did not order the dump closed. The main health concern surrounding the landfill is to the water supply.

While many trees were destroyed to make way for the Sochi games, many more were planted. Olympic contractors planted 1.5 million new trees. This apparently breaks down to three trees for every one that was cut down in the Sochi National Park. However, planting does not replace the complex and diverse ecosystem of an old growth forest.

Russian environmentalists who have spoken out about the environmental impacts of the games are being threatened. Andrey Rudomakha, the leader of Environmental Watch of the North Caucasus (EWNC). was threatened by Russian authorities after the organization said that the Olympics will cause serious damage to Sochi National Park. Other activists have also been persecuted by the state including Gazaryan and Vitishko who have both been convicted of property damage following a protest over a residence allegedly belonging to the local governor.

Taken together, the picture emerging out of Sochi is more about greenwash on a colossal scale than it is about serious sustainability efforts. One recent illustration involves a carefully staged photo-op in which the Russian President is seen caressing an endangered Persian leopard cub. It is meant to create the impression that President Vladimir Putin actually cares about the environment. “We’ve decided to restore the population of the Persian leopard because of the Olympic Games,” Putin said. “Let’s say that because of the Olympic Games, we have restored parts of the destroyed nature.”

Perhaps the best image depicting the 2014 games in Sochi was that of a women who was spray painting the grass green around an Olympic venue (see image above). The Sochi 2014 environmental programs will have lasting impacts on the environment although not in the positive way that was originally hoped for. Rather than protect water, flora and fauna in the region, the adverse environmental impacts of the games will be felt for generations. The games have seriously undermined regional biodiversity which all but eradicates claims that this is a green olympics, let alone the greenest ever. Sochi organizers have failed on all their green promises, says Suren Gazaryan, a zoologist and member of the EWNC.

Simon Lewis, who runs Team Planet, a U.K.-based consultancy on sustainability in sport, says “Sochi should never have happened in that location. It was a poor decision by IOC members based on poor information.” Rashid Alimov, coordinator of the toxic waste program at Greenpeace Russia said Sochi authorities are interpreting “Zero Waste” to mean getting waste out of sight.

Russia is infamous for its wanton pursuit of petrochemicals and more recently it has been gaining notoriety for its intolerance toward the LGBT community. With an estimated 51 billion dollar price tag, and billions of dollars lost due to graft, Sochi may be remembered as the most corrupt and certainly the most expensive winter games but it won’t be remembered as the greenest.

New US Farm Bill is Good News for the Environment

New US Farm Bill is Good News for the Environment