Russia Imprisons Environmental Activists Ahead of the Sochi Olympics 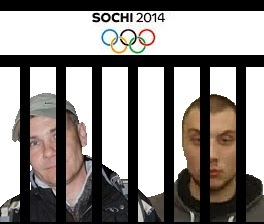 While Russia is trying to portray the 2014 Olympics in Sochi as the greenest ever, they are silencing those who threaten to expose the truth about the environmental toll of the games. A couple of Russian environmental activists who have spoken out against the nations ecological crimes were locked up for the Olympic games. One such individual is Yevgeny Vitishko an ecologist and activist who was prevented from publishing a report detailing environmental damage caused by Olympic construction. He was sentenced to 15 days in prison for the crime of swearing in public.

Another environmental activist, Igor Kharchenko, was sentenced to five days in jail for disobeying a police officer on a street near the route of the Olympic torch relay. Amnesty International described his trial as a “blatantly unfair closed trial at which no lawyer was present.” According to Amnesty International who reviewed video footage of his arrest, there is no indication that he resisted orders as the police allege.

Kharchenko’s car was also vandalized by masked assailants in Krasnodar, the capital city of the Russian region hosting the Sochi Winter Olympics.

“This foul play must come to an end. The Russian authorities must halt their harassment of civil society activists, protect the right to peaceful freedom of expression, and release the Sochi prisoners of conscience: Igor Kharchenko and his fellow environmentalist Yevgeny Vitishko, who is currently serving 15 days in administrative detention on trumped-up charges.”